Which was the first record you bought?

The first Dark Electro album I bought was Decoded Feedback’s Bio-vital. It’s still one of my favourite albums and was a major influence when I first decided to start making music. The first album I bought, in general, was probably a Techno compilation. Techno was really big when I was in junior high school so I used to buy compilations to play at parties. I also remember buying Megadeth’s Youthanasia early on. Random musical tastes…

The Blaster made me do it! He came to me and he had bought all this equipment already. He handed me a stack of CDs and said that’s what he wanted to sound like. I was still mostly into Metal at the time but thought why not? Our initial intent was to make Industrial Metal but we just couldn’t get it to work then. We eventually decided to go all-electronic but we still dabble in Metal from time to time as you know.

Your top ten influences. Why?

My top influences are definitely the first artists I heard in the genre. The ones that got me hooked. Hocico, Suicide Commando, Funkervogt, E-Craft at first, then later more harsh yet melodic bands like S.I.T.D., Grendel or Fractured. I had really liked the New Wave of Swedish Death Metal which was similarly heavy and brutal yet with great and beautiful melodies so that certainly appealed. Finally, production-wise, Trance has been an influence especially in our last 2 albums as I’m trying to get that kind of energy and ‘momentum’ into our tracks.

I don’t think I can put them in order without going crazy in the process but my top Industrial albums are:

My favourite Metal albums are

Again in no particular order, “The Day The Earth Stood Still”, “The Thing”, “Alien” and “Aliens”, “Bladerunner”, “Invasion Of The Body snatchers”, “Starship Troopers”, “Event Horizon”, “The Fly”, “Predator” and “The Terminator”. I keep thinking of more but I’ll just stop there. I suck at lists.

You have already been asked many times, allow once again: There was a change of musical direction early on. Was it related to influences or something else?

As I mentioned above it was mostly that we couldn’t get it to work the way we had imagined it. We didn’t have the skills or resources at the time. 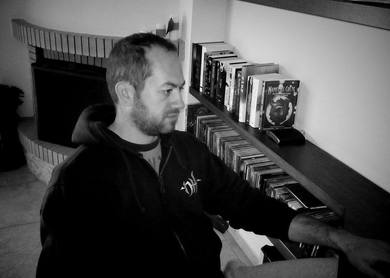 A member of your band wrote at some point that whoever played “Subuteo” as a kid will has some experiences that PES or Fifa can never reproduce. Extending this what is the current generation of musicians missing?

It’s true that online gaming, for example, can’t really replicate the experience of playing a game or sport with your friends. However, although it’s easy to get nostalgic about the past, I feel we just have much more choice and many more distractions these days. You can still go play Subuteo if you want and I personally hardly played any when I was young.

Also the other way around, what was available “back then” available that you wished you had today?

What I honestly wish I had today is just more time. Time to just listen to music, read a book or spent all day on the basketball court or the beach like I did when I was young. Don’t grow up, it’s a trap!

In the same lines we are recently witnessing the change of mentality from owning/buying the medium (such as CDs/Vinyls/cassette but also magazines/fanzines) to leasing/using it (streaming/YouTube and sites). What do you think about it? (I personally miss the printed material mostly while waiting for or inside a bus. It annoys me reading from the cell phone.

I’m not a fan although I do appreciate the ease and availability the digital age offers. Lately I’ve started reading books on Kindle, for instance, but it doesn’t sit right with me somehow…

Something that distinguishes the band is that it’s members live in Crete, something at least… unusual. How is it not being a traditional musician in Crete. Does it affect your lives, apart from your musical influences? Does the press and people treat the band differently?

Indeed when we first ‘arrived’ on the scene we were seen as a novelty act perhaps. That can be a double-edged sword but hopefully the fact that we have been around for 10 years now means we weren’t just that. In our personal lives it has no impact, truth be told. Most people know nothing about it. They are still surprised when they find out we make music and more surprised yet when they hear what music. My nephews think I’m awesome because I’m on Youtube so I got that going for me!

One of the criticisms of dark electronic/industrial music is that the genre is stagnant and not evolving, and that musicians refuse to take risks for fear of being “not in the scene.” Preemptive Strike 0.1 is one of the few bands that seem to break this mould, and freely experiments with different sounds, instruments, and other aspects of music but still keeping it dark. What drive is behind your willingness to experiment with different sounds in your music and do you have a goal beyond making music you enjoy yourselves?

I suppose it’s a combination of 2 things. Firstly, we’ve always believed in trying to have a unique identity. It kind of bothered me when we started that reviews would compare us to more well-known bands. While this could actually just be poor writing, no offense, it still irked me. So it became my mission in a way to confound reviewers! Secondly, we have such varied musical tastes that it’s only natural to want to experiment with different styles.

Who would you most like to collaborate with from the whole music industry?

At one point I really wanted to collaborate, and still would in fact, with Peter Tagtren of Hypocrisy. They are a Swedish Death Metal band with lyrics about alien abduction and experimentation so it’s a natural pairing in my eyes. Generally, I think cross-genre collaborations are the most interesting and I’m open to all collaborations even if they are often a pain in the ass to organise. We’ve been lucky that no one has ever left us hanging after agreeing to a collaboration.

Which period in history would you like visit and why?

Probably the near future, say 100 years from now, to see if we finally get all the cool stuff science fiction promised us like flying cars, interplanetary travel and ‘head-in-a-jar’ technology. ;)

What makes you happy/angry in life?

Too much makes me angry… at the risk of sounding cocky, I think mostly stupidity in all its forms but I’ve done my share of stupid and that makes me most angry. What makes me happy is doing the things I love and being with the people I love.

Which conspiracy theories if any, you think may be true?

Let me just say, I for one, welcome our reptilian overlords! Seriously though, I don’t believe in any conspiracy theories but I do enjoy reading them.